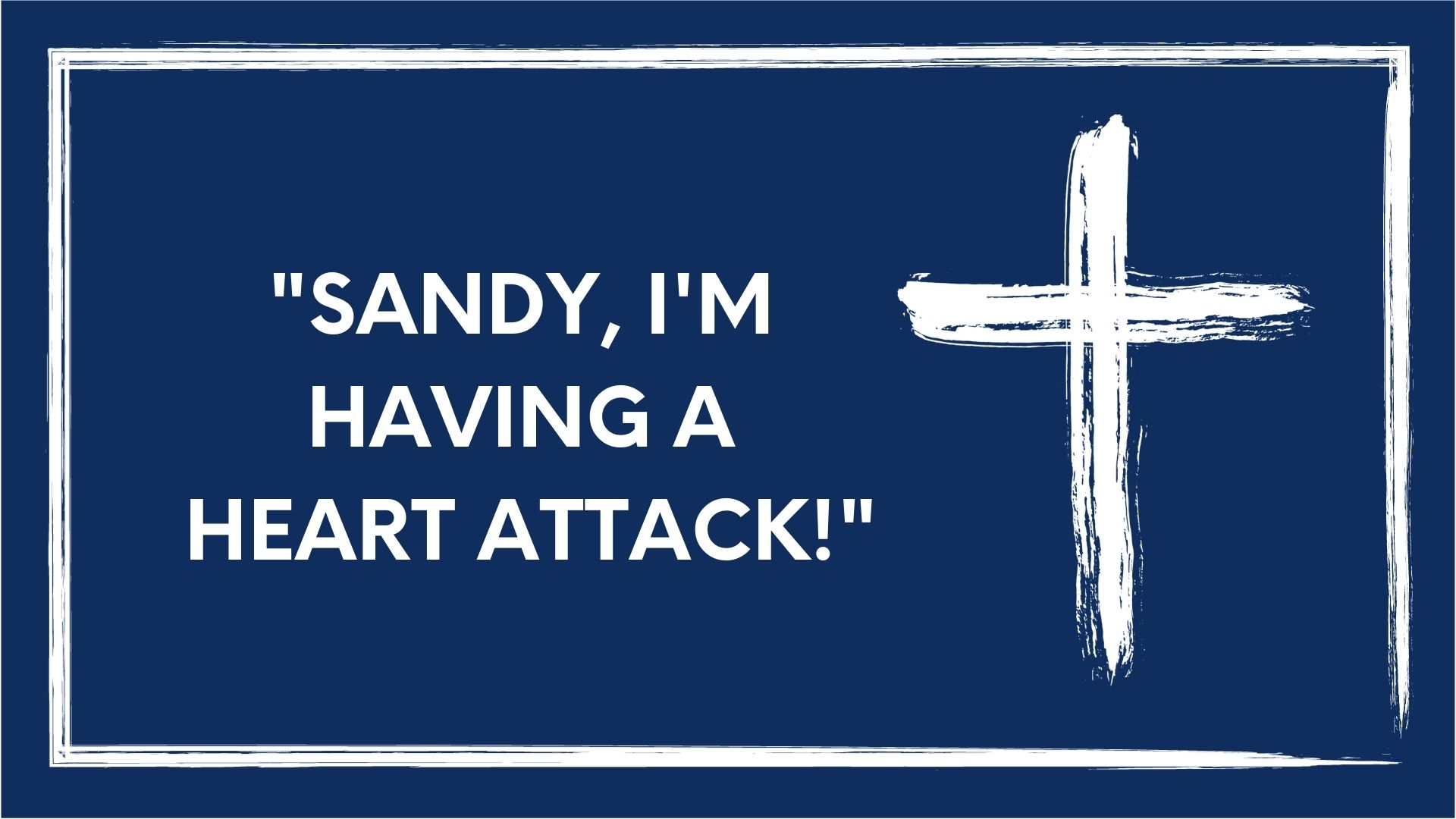 Have you ever had a day filled with so much unexpected action-packed adventure where literally every other sentence that you uttered was “this can’t be happening?” I vividly remember a day like this in the spring of 2001 which ultimately resulted in a surprising opportunity to share God’s grace.

I was working for a financial company in downtown Baltimore. I remember the day started off routinely and ordinarily until the moment I heard my co-worker Dawn say, “Sandy, I’m having a heart attack!” She was sweating profusely, out of breath, and clenching her chest. Another co-worker immediately called 911. As the paramedics arrived and evaluated Dawn’s condition, she looked over at me and said, “Sandy, I’m so afraid will you come with me to the hospital?” I agreed. Another co-worker named Lisa said that she would be working late and would come to the hospital later to relieve me if Dawn was still admitted. With that arrangement in place and with my supervisor’s approval, I left work and drove to the hospital.

I found out where Dawn was admitted when I arrived at the hospital. The nurses said that she was stabilized for the time being and that they were conducting tests on her condition. I talked with Dawn for a few minutes before going to the waiting area outside of her room. By 5:00 PM, I was asked to move to the waiting area in the front lobby of the hospital because I was not Dawn’s next of kin. I had been calling and leaving messages with Dawn’s mother and brother for over two hours with no success and now it was 7:00 PM.

As I sat in the waiting room, I began to pray for Dawn. I also asked the Lord, why was this happening, why I was in the middle of all of this, and what was his plan. As I finished praying, the strangest and most outrageous thing happened. I heard loud screams and saw people running.

Somehow five bats had gotten into the hospital lobby and were heading toward the waiting room where I was sitting. I ran for cover and the waiting room was sealed off. This was so surreal and beyond belief. Was this the answer to my prayer? What else could go wrong!

The time was now about 8:00 PM. With the threat of bats hovering, I called Dawn’s brother and a woman answered the phone. I was so excited to hear a voice on the phone. I began to explain to her who I was and why I was calling, but before I could finish, she furiously informed me in the most irate high pitched voice that she and Dawn’s brother were no longer together and that I should never, ever call her again. I heard the phone slam and then an empty dial tone. I exclaimed out loud, “This cannot be happening!”

I attempted to call Dawn’s mother but still got no answer. I asked to see Dawn so that I could get some alternate phone numbers but was told I had to wait.

The time was now about 8:30 PM. My co-worker Lisa called to find out about Dawn’s status. I let her know that Dawn’s condition was stable and that tests were being conducted, but that I could not talk to Dawn or get in touch with her family. Lisa let me know that she was leaving work and would come over to the hospital. I was so thankful that I was going to be relieved of all this. By the time Lisa arrived, the doctor attending to Dawn said that we could visit with her. We were so glad to learn that Dawn did not have a heart attack. She had actually experienced a panic attack. Her doctor, however, wanted to keep her overnight for observation.

Soon after, my phone rang. It was Dawn’s mother. I was so delighted and relieved. She said that she was on her way to the hospital. Lisa and I decided to stay and pray with Dawn until her mother arrived.

The time was now after 11:00 PM. As Lisa and I were walking out of the hospital, I wished her a good night and told her that I would see her the following day at work. Then, Lisa informed me that she did not drive to the hospital. She had been dropped off to avoid paying for additional parking. She asked if I could drive her to the parking garage where she parked her car and I agreed. As we drove up to the parking garage we were shocked to see the entryway gated and locked. Lisa parked in one of those parking garages where you have to leave your car keys with a garage attendant. We called for the attendant who informed us that the garage closed at 11:00 PM and that all car keys left with the morning attendant are taken to their headquarters location four blocks away. I figured the worst part of this night was over, so I agreed to drive Lisa to get her car keys and then back to the parking garage to get her car.

It was now about midnight and I was on my way home – or so I thought. I looked down at my fuel gauge and it was past empty. I had two miles left before I ran out of gas. I exclaimed out loud, “This cannot be happening!” That nagging voice that I ignored that morning about stopping to get gas had come back to haunt me. I didn’t expect to drive to the hospital and then take Lisa back and forth to the parking garage. When I recalculated my route, it occurred to me that the closest gas station was located on Orleans Street, which is in a very bad part of the city and had the potential to be very dangerous at night. I had no choice but to stop there for gas.

As I pulled into the gas station, I prayed for God’s protection. I observed my surroundings and was pretty sure that I saw more than a few drug deals happening. I decided to only fill my tank halfway. I looked up and saw a man who looked homeless. He approached a few of the people standing around the gas station, but they dismissed him. I began to pray, “Lord, please don’t let this man see me.” He began to walk toward me and asked if I could spare a few dollars. I gave him the few dollars I had in my pocket. Then, the Holy Spirit prompted me to talk to this man. I introduced myself and asked his name. He said his name was Bernard. I asked him what he was doing out on the street so late at night. He avoided my question and asked for a few more dollars, which I did not have. I told Bernard that I had something better to share with him. I began to share the Gospel with him. Suddenly, God made me feel safe and oblivious to all of the things happening in the gas station parking lot.

When I began to talk about the sinfulness of man and the love of God, Bernard began to weep out loud. He told me that he wanted to die. He said that he couldn’t stop drinking and was very depressed as a result. He said that his excessive drinking had led to his marriage ending in divorce, an estranged relationship with his children, loss of employment, and ultimately homelessness. I asked Bernard if he wanted to be saved. He said yes. I explained the Gospel and prayed with him to receive Christ. Bernard was so overjoyed about his new salvation in Christ that he hugged me and surprisingly gave me back the few dollars I had given him.

I gave him a Gospel tract for assurance scriptures and pointed to a local church. I told him to go to that church first thing in the morning and to tell them that he surrendered his life to Jesus Christ and that they would help him. He said that he would go there now and wait until morning. The last memory that I have of Bernard is of him with a huge smile on his face, his head held high, and walking determinedly toward that church. I haven’t seen him since that day, but if he was sincere when he prayed to receive Christ, I will see him again in heaven.

The time was now about 1:30 AM and my adventure had finally ended. As I drove home, I was amazed by what God allowed me to be a part of. All of the craziness that I had experienced earlier that day was so insignificant in comparison to what happened at that gas station. This was all truly a part of God’s plan. Dawn, Lisa, and I were already secured in Christ. I thought all of these events happened because Dawn’s physical life needed to be saved, but ultimately it was really Bernard who needed his spiritual life to be saved by God.

One might think, what a strange way for God to get the message of the Gospel to someone. Isaiah 55:9 says, “As the heavens are higher than the earth, so are my ways higher than your ways and my thoughts than your thoughts.” Lord, when the path or task seems unclear and even bizarre, please increase our faith and give us the wisdom to hear your voice and to trust and follow your will.

Do you want to become more confident in sharing God’s grace and grow in your faith? Join us for WNeLive! Click here for the various options being offered. It’s every Wednesday for one hour per week and is facilitated by many of Bridgeway’s pastors and leaders. Not only can you grow mature and mighty in Christ, but you can learn more about how to share the love of Christ with others who need to be encouraged.