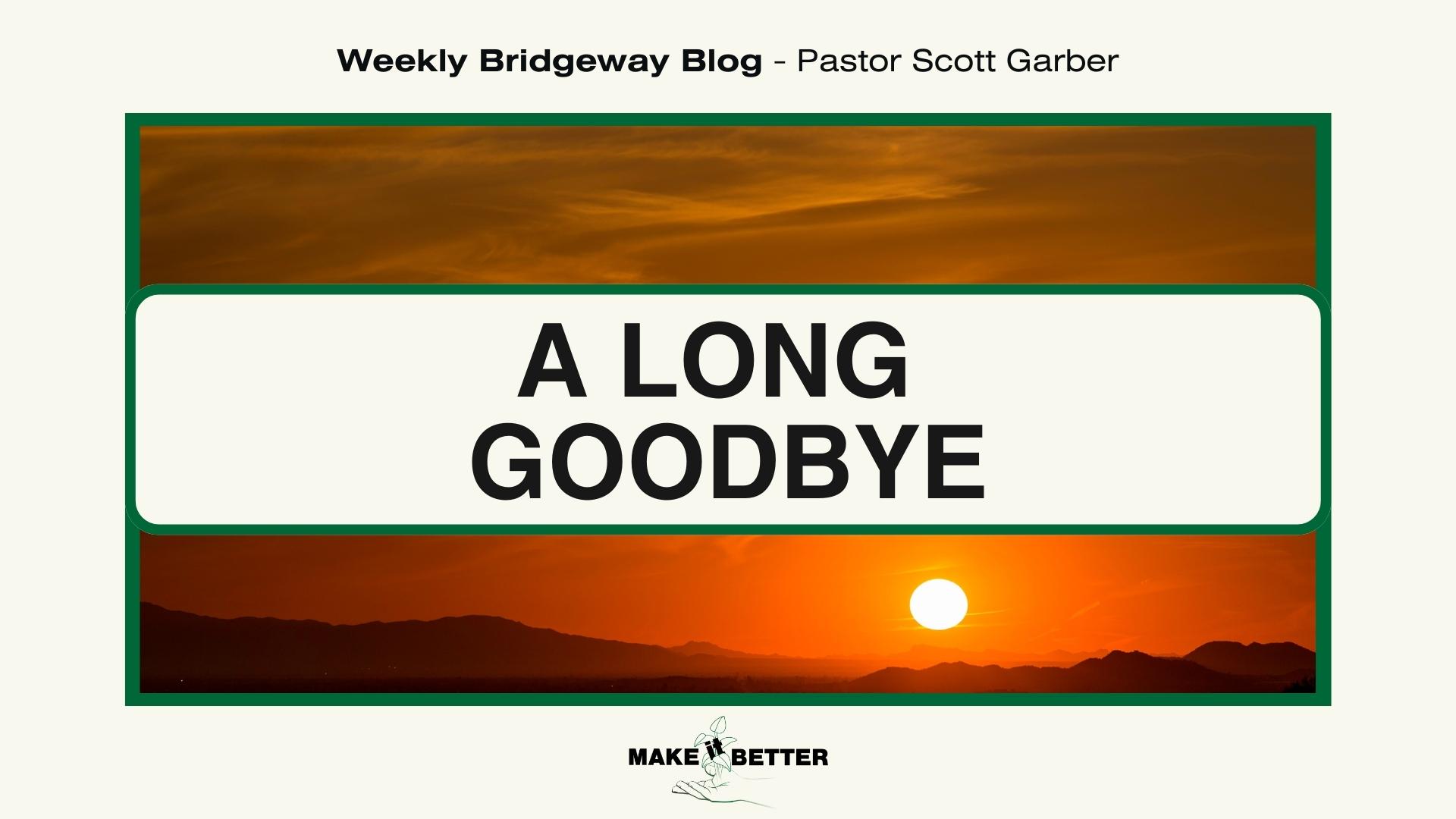 When I pass someone on the sidewalk in my neighborhood, even if it’s a perfect stranger, I often say “hi.” Once I’ve passed them, however, I never turn around and say “goodbye.” Because… well, that would be weird. But also, we save our goodbyes for people we care about.

Of course, some goodbyes are just the “see ya later” variety. No big deal. No parting sorrow. But other farewells really are a big deal because you don’t know if or how often you might see certain loved ones again. I call these long goodbyes.

In an earlier life, Cindi and I were missionaries, so we’ve had our share of long goodbyes. First came a long goodbye to loved ones here at home. When we left for Spain in the mid-80s, we thought we might spend our entire careers overseas. And, of course, back then there was no Facebook – only prohibitively expensive international calls or tedious letter writing.

More than eight years later, we were thoroughly integrated into our new culture and surrounded by great friends and colleagues. Later we felt called to a new ministry assignment in faraway Romania. And, so, another long and tearful goodbye.

In a few years, that missionary project was complete, and we found ourselves facing another long goodbye. This time we were coming “home” to Ohio, a place that, while still familiar, now felt strangely foreign. Rather than settling back into the context in which I had been raised, we spent four years worshiping and ministering in a traditional, African-American church – until the opportunity arose to pastor a multicultural church on Capitol Hill in DC. And, yes, another long goodbye.

Five years passed between that long goodbye and the next, when we left that Capitol Hill pastorate, wondering where we would ever find a church where we could continue being the culturally confused people we had become.

God in his grace led us to Bridgeway in December of 2008. It immediately felt like home and has been ever since. During these years, Dr. Anderson has graciously incorporated me into ministry at Bridgeway as if I were one of the pastors, eventually naming me Pastor-at-Large. It’s been a real delight working with him and the other members of the clergy team. During the interpersonal desert that was the Covid era, my connection with that group proved to be a real lifeline.

Something else also happened during that extended period of “no-contact” church life. If you’ve followed my story up till now, you might realize that nearly every long goodbye was preceded by a sense of calling to something else. And over the past couple of years, we have felt the stirring of a burden for DC and a desire to make a contribution to what God is doing in the city we have called home since 2003.

I talked with Dr. Anderson about what we were sensing back in late spring, and with his blessing, we have taken some time to explore a few possible church settings here in DC. We have been encouraged to see that God is, indeed, at work in several intentionally multicultural congregations. At this point, we have focused our attention on one church, which we will be attending regularly for a while to make sure that it’s a good fit.

In spite of all the practice I’ve had at long goodbyes, they’ve never gotten any easier. Of course, we’re not going to the other side of the world, so we do hope to see you again. But it won’t be every week, as has been our joy for these many years. Just know that Cindi and I have been greatly encouraged by the stories that God is writing in your lives. It has been our privilege to share this portion of our journey with you and to make some small contribution to the big thing that God is doing at Bridgeway.

Speaking of long goodbyes, I’m reminded of a particularly poignant example in Acts chapter 20, where Paul meets with the elders of the church in Ephesus. After years of ministering in their midst, he bids them an emotional farewell. And I’ll borrow his words in my benediction to you, Bridgeway: “I commit you to God and to the word of his grace…” Amen.